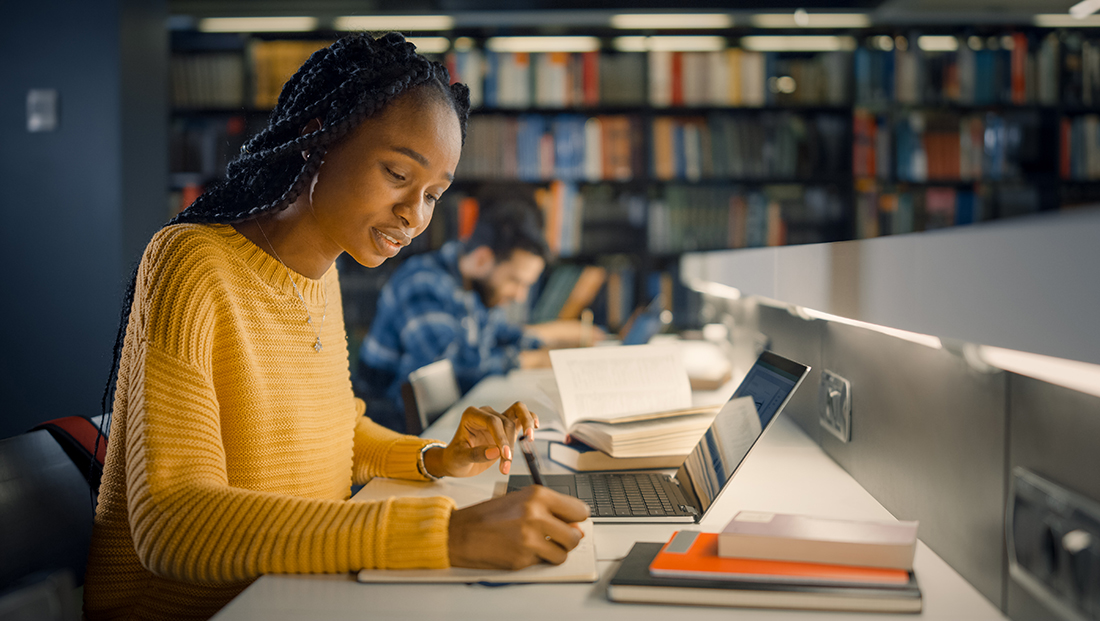 A key component of our Black Careers Matter report research was listening to the voices of young Black people.

We interviewed 11 students and early career professionals from Black heritage backgrounds including a variety of African, Caribbean and mixed race backgrounds. We backed up some of these qualitative insights by drawing on a survey of over 2000 student job seekers that we conducted last year.

One of the strongest messages that came through from our 11 participants was that they recognised racial inequalities as an important feature of their lives and careers. They reported that this changed the context for their careers, meaning that they had to prove themselves by outperforming White candidates.

This commitment to hard work and career advancement was backed up in our quantitative data. Non-White respondents to the survey were 1.4 times more likely to agree that they were focused on their career and 1.6 times more likely to say that getting a good salary was important to them.

It is important for student employers to understand this perspective and recognise the importance of not just being fair in recruitment and management processes, but also actively being seen to be fair.

The education system is not preparing young people for diverse workplaces

Participants questioned whether the education system had adequately prepared them for the transition to the workplace. They wanted to see more career education in schools, colleges and universities and for this support to continue after graduation. Participants wanted to feel that they were well prepared for the workplace and that there were opportunities available for them to make their mark.

They also highlighted that career education should include discussion of and ideas about how to challenge the racism that they had encountered in their career. They hoped that the education system could become an active force for positive change.

Beyond the general call for better alignment between the education and employment systems, participants were arguing for a specific engagement with the issue of race and racism to help prepare young people for the experiences they would be likely to encounter when they entered the workforce. This approach to building practical resilience to racism also needs to be balanced with education that challenges racism and builds wider understanding of other cultures.

As race is an important way in which people’s experience of work is structured, it is important for educators and careers professionals to talk about this with both Black and White students.

It is challenging to work in an all White environment

Our participants were very aware that they were moving from a more diverse university environment into a work environment that was likely to be less diverse. They also noted that people from Black heritage backgrounds were poorly represented in the senior levels of many organisations.

Some participants highlighted the fact that they looked carefully at the representation of people from Black heritage backgrounds at the board level as part of their decision making about whether to apply for a particular organisation.

Participants repeatedly highlighted the importance of finding a company where they would be able to work with other people from Black heritage backgrounds as this would help them to feel at ease when they were working. This cannot be achieved by just adding some Black faces to recruitment publicity, it needs to connect to the reality of what it is like to work in the organisation.

Recruitment is run by White people

During recruitment processes participants anticipated encountering both overt racism and bias. Several participants raised the fact that their name identified them as Black before an employer had even seen them. They argued that it is important that employers adopt name-blind approaches to reduce the possibility of bias creeping into the process at this point.

Participants also viewed recruitment processes as being primarily designed and run by White people. Many felt that the situation would be improved by ensuring that there were some people from Black heritage backgrounds involved in the process.

The idea that some Black candidates might exhibit potential in a different way from their White counterparts was highlighted by several participants. Addressing this would be much easier if people from Black heritage backgrounds were involved in the selection process, but where they are not it is important that interviewers educate themselves, reflect on differences and seek wider forms of evidence.

These findings were echoed in the quantitative data which found that non-White respondents were twice as likely (2.3x) to want more insights about how to succeed in assessment centres.

This suggests that Black candidates are more likely to be braced for poor treatment when they enter the recruitment process. This is likely to increase anxiety levels and may interfere with performance.

Such concerns suggest that employers should be careful about the design of their recruitment processes and make efforts to ensure that they are fair, open to different types of talent and that the commitment to diversity extends to those running the selection as well as those participating in it. It also suggests that employers should make efforts to show that their processes are fair and transparent, particularly when they are targeting students from Black heritage backgrounds.

Participants were aware that many organisations felt pressure to improve the representation of people from Black heritage backgrounds. Some participants were sceptical of how deep commitments following the Black Lives Matter movement went and concerned that as the spotlight moved away employers would lose interest.

Participants were clear that it should not just be a branding issue, nor could it be solved exclusively through recruitment. Improving diversity needs to be something that impacts on the whole organisation rather than just at the entry point.

This means that organisations need to build progression pathways for new employees and support their career development by using approaches like mentoring and sponsorship to help people to build a network within the organisation.

It is also important for organisations to listen carefully to their Black staff, perhaps using feedback surveys or establishing Black employees’ forums. But these need to be real opportunities to influence practice rather than just paying lip service to the idea of consultation.

It can be challenging to work with White colleagues

Participants frequently talked about having to actively manage their situation as one of the few Black employees. This takes effort and skill, knowing how to fit in with and adapt to what their predominantly White colleagues expect. In some cases, they felt that this was like putting on a disguise where they were expected to cover up their real personality or appearance to fit in.

They recognised that their White colleagues were often curious about the experience of being Black and that some were keen to talk about it. In many cases this interest in talking comes from a genuine attempt to understand, but if handled insensitively it runs the risk of turning into a microaggression. In general participants were happy to talk to White people about race, but they wanted to feel that the White person had already done some of the work.

This is an excerpt from ISE’s Black Careers Matter report