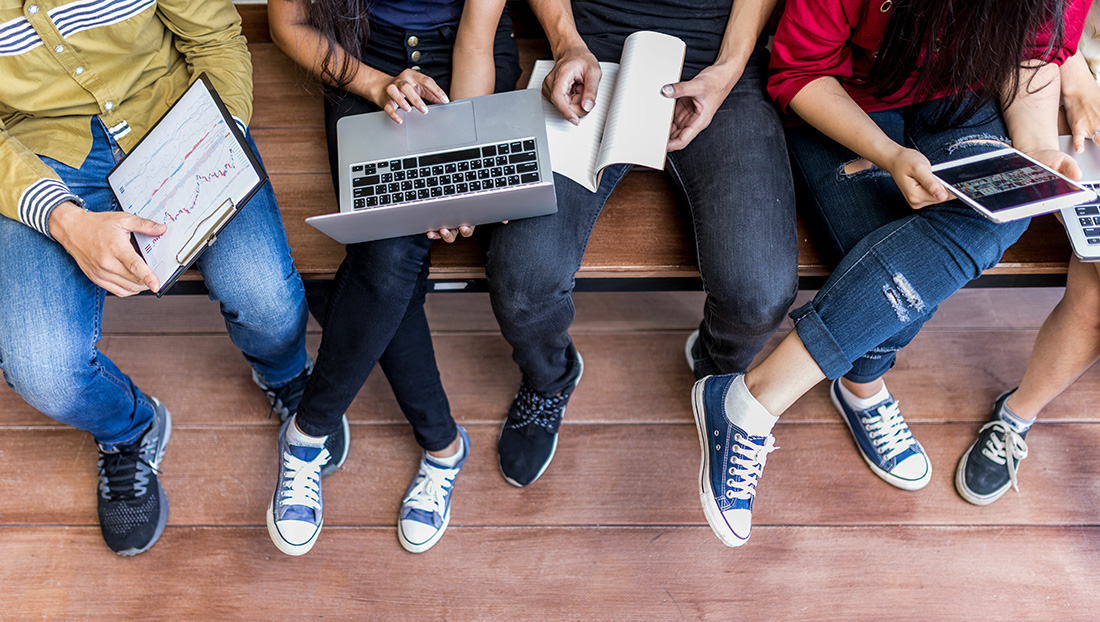 What past lessons can we apply to virtual attraction today?

Many of the well-established paths to finding, attracting and recruiting students and graduates have been turned upside down, as meeting in-person was off the table, and the UK experienced a huge amount of uncertainty in the jobs market and economy.

But what does this mean as we begin to turn the corner and navigate our way out of the pandemic? While in many ways the current state of play is unprecedented, there are existing lessons to be applied to virtual student attraction.

What can we learn from history?

To understand the current trends, it helps to have a bit of historical context. And an interesting point for comparison is the fallout from the 2008 financial crisis – another global recession and inflection point for the jobs market and how companies find staff.

In the 2000s, online applications gradually began to dominate, lowering the barriers involved in applying for jobs. Responding to this shift, a lot of the effort from employers began to be about employer branding and the top of the recruitment funnel. In other words, the question was ‘if more applications than ever are being sent, how do we get as many eyes as possible on the role we’re hiring for, and us as an organisation?’

By the time of the 2008 financial crisis and recession, the imbalance in the ratio of available jobs and available candidates made it an employer’s market – and saw an abundance of candidates. All this led to a process that lacked quality, was inefficient and could be ultimately demoralising for applicants starting out in their career – without sites like Glassdoor or responses on social media functioning as a kind of brake on the process.

Since then, despite huge changes in the jobs market and technology, the overall process and strategy has remained largely the same. Businesses still spend most of their money upfront to attract initial applications. What changed is that protecting the candidate experience and employer brand became a key consideration too. All this meant more money also needed to be spent on responding to applicants, in order to avoid public criticism and reputational damage.

All of which brings us up to the present day. So does another recession mean more bad news for applicants starting out in their careers? Not necessarily.

The economic prognosis for recovery in the wake of the pandemic-induced recession is somewhat different to what we saw in 2008, and takes place in a very different context in terms of the jobs market and applications process too.

In the context of Covid, a number of economists expect that a K Shaped recovery is likely without huge levels of sustained intervention from the state. The World Economic Forum describes this as a situation where “technology and large capital firms are expected to recover at a far faster rate than small businesses and industries directly affected by Covid-19, such as hospitality.”

All this is likely to affect the idea of what the attraction process should look like. With some industries unlikely to be able to hire anywhere near the numbers they might usually have until they’re back on their feet, candidates who would have applied in these sectors will need to look somewhere else instead. This means many students and recent graduates will be issuing applications to any job that might work.

All this, alongside a broader increase in the number of applicants across the board as we factor in the pent-up backlog of jobseekers, means filtering out unsuitable candidates becomes costlier and much harder – and keeping the applications experience positive even harder than that.

But what this does mean is that we’ve reached something of a tipping point in the candidate attraction process, where directly sourcing and reaching out to potential hires is becoming relatively inexpensive as a result of the challenges presented by the current system.

Economics aside, there’s a business case from a diversity and inclusion standpoint too. The current system of swathes applications being automatically filtered out by factors that can be subject to bias – such as schooling – has left much to be desired in terms of inclusion for some time.

And where we’ve seen an initial response from HR decision makers since the pandemic to the challenges faced in hiring, it’s only led to more problems. Our recent ‘Netpotism’ report found that 57% of businesses say they’ve become more reliant on word of mouth recommendations during the pandemic, which has obvious implications in terms of excluding certain groups.

All this means that we shift from just talking about virtual attraction to taking a more nuanced approach to recruitment. One that factors in far more direct sourcing to tackle these key issues we’re likely to face in the coming years. That’s what Handshake was designed to do – satisfy these questions of scale, directness and considerations around diversity and inclusion, making early careers networks more open.

My friend Dan Doherty puts this best – “if you try to cook a Michelin Star worthy meal, and when you’re shopping, you shove everything you see into a shopping trolley before deciding what’s suitable and chucking 98% of it out at checkout, it’s not an efficient process and won’t win you any friends either.”

Planning and proactivity, therefore, are likely to become key watchwords in early careers recruitment for the foreseeable future – and we expect that businesses, the economy and candidates will all benefit as a result.