Where now for apprenticeships?

As we look forward to our Developing Apprenticeships Conference, ISE’s Tristram Hooley crunches the latest data to show how employers are dealing with apprentices.

Apprenticeships have been central to all recent governments’ approach to skills.

While the promise of three million apprentices by 2020 never quite came off, the 2019 Conservative manifesto reiterated the Party’s commitment to apprenticeships. However, since Boris Johnson took power and Gavin Williamson took over at the Department for Education, they have both had a few things on their plates that have prevented apprenticeships from getting very much attention.

Gavin Williamson recently gave a speech to the Association of Colleges which was supposed to provide insights into future government thinking about the skills agenda, but barely mentioned apprenticeships. Nonetheless, with a new further education white paper on the horizon it is a good time to reassess where we are with apprenticeships.

As I prepare for the ISE Developing Apprenticeships Conference taking place on 8 and 9 December, the ISE recruitment survey has provided a good idea of how our members are currently dealing with apprenticeships.

We are now in the position where the overwhelming majority (79%) of ISE members report that they employ apprentices. Apprenticeships are no longer a niche talent stream for our sector, but it is also clear that few organisations are delivering the volume of apprenticeships that the government is hoping for and incentivising through the apprenticeship levy.

On average organisations are only spending a third (33%) of their apprenticeship levy. This is actually a slightly lower proportion than we found in last year’s survey (37%) and suggests that levy spending may have plateaued amongst ISE members.

Who are the apprentices?

Despite plateauing spending on apprenticeships, the number of school and college leavers that ISE members recruited rose by 6% this year in stark contrast to falling graduate numbers.

It may be that the desire to keep spending the levy, coupled with the incentives to employ more apprentices offered in the Plan for Jobs have kept ISE members engaged with the school and college entry route despite Covid and the recession.

School and college leaver recruitment is important to the apprenticeship agenda because 86% of these hires are enrolled on an apprenticeship (a total of 19,030 apprentices in the most recent survey).

When we compare the total number of apprentices from the whole survey we can see a clearer picture of who ISE members are spending their levy money on. 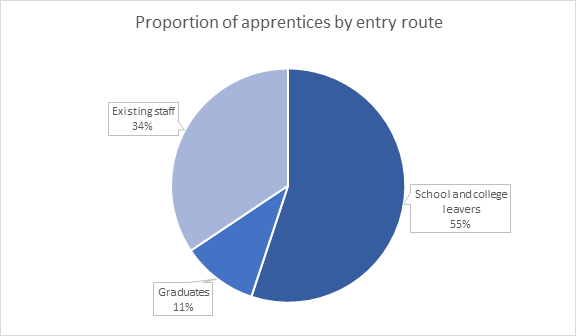 Further insights are provided by looking at the levels that apprenticeships are being delivered at.

The next figure breaks down the average profile of different apprenticeship levels reported by respondents. It demonstrates that ISE members are using a wide range of different levels of apprenticeship, but that they are making more use, in comparison with the national average, of higher and degree level apprenticeships.

The findings from the ISE survey demonstrate our members are making good use of apprenticeships, even if they are not able to spend all of their levy. But, there are some worrying signs that apprenticeships are not faring so well across all employers.

So far ISE members have been doing comparatively better than employers in the wider economy. They have maintained apprenticeship recruitment and continued to keep their pipeline of talent flowing.

At ISE we believe that this is a good strategy and that those employers who invest in entry-level talent now, will reap the rewards in the future. But, there are still challenging times ahead. The labour market impact of Covid will only really become apparent once the furlough ends, a prolonged recession looks likely and a no-deal Brexit is still on the cards. So, there is plenty of rocky water still to navigate.

The ISE Developing Apprentices Conference 2020 provides an ideal opportunity to talk over some of these issues and learn how a range of employers are responding to them. We hope to see you all there to continue these discussions.