How Brexit may impact student recruitment

If everything goes according to plan, we are only a couple of months away from Brexit.Tristram Hooley, ISE’s chief research officer, explores whether it will make any difference to student recruitment using new data from ISE’s annual Pulse Survey

Try saying a word over and over again. For example, if you say ‘cucumber’ 10 times it starts to lose its meaning. Once you’ve said it 100 times it basically just becomes a noise with no real relation to language at all. I’ve now said the word ‘Brexit’ a lot more than 100 times. Because of this it can be easy to forget what it is all really about and to view Brexit as a bit of a game going on in the media and in Westminster.

Of course, Brexit isn’t a game and questions about the future of the British labour market are right at the heart of what it is about. So, whether you are leave or remain, and whether you are looking for a job or seeking to recruit, you should probably be thinking about how Brexit is going to change jobs, careers, skills and labour needs across the country.

At the Institute of Student Employers we are particularly interested in how these issues will play out for young workers who are just entering the labour market and for the employers who are recruiting them. So, we decided to include some questions in our annual Pulse Survey that we use to take the temperature of the labour market at the start of the year.

A clear majority of employers (70%) told us that they did not anticipate that Brexit would have an impact on their recruitment needs. They plan to carry on recruiting in much the same way, whatever happens with Brexit. The data on their current recruitment activities backed this up with employers anticipating a substantial increase (18%) in the number of graduates that they are trying to recruit this year and a massive increase (47%) in the number of apprentices that they are planning to take on too. 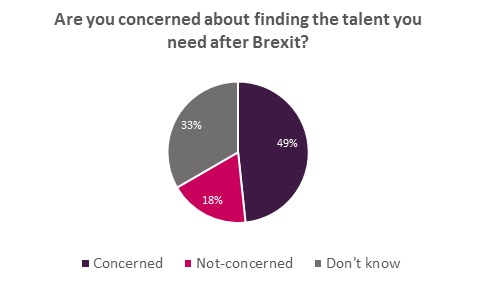 This suggests that employers view Brexit as more of a challenge with respect to the availability of specialist and technical skills than in terms of finding enough people to fill more general roles. One respondent illustrated this by reporting that they had found that overseas graduates tended to outperform domestic graduates in mathematics. Another argued that it would be important to continue to allow overseas graduates to work in the UK following graduation.

A need for clarity

Despite these concerns, the majority of respondents were either unclear on how Brexit would impact on recruitment or did not anticipate it having a negative impact on their ability to source talent. One argued that regardless of what happens with Brexit ‘clarity is needed as soon as possible to enable us to plan.’ While another argued that Brexit should be accompanied by ‘a heightened focus on high quality apprenticeship and entry level routes to employment… This is imperative to support our UK student talent.’

The uncharted waters of Brexit

This research suggests that whatever happens with Brexit, large employers are currently pretty optimistic about the future of the student labour market. However, there are also important concerns about the supply of talent, which government and the advocates of Brexit will need to address. Furthermore, it is worth noting that a third of employers were throwing up their hands and concluding that they ‘don’t know’ what will happen after Brexit. In this they are probably like most of the rest of us and even many of the politicians in parliament.

As we move into the uncharted waters of Brexit, the Institute of Student Employers will be keeping a close eye on how things develop.